Time and tide wait for no man

Time is perhaps that one thing no one ever feels they have excess of. Truth be told, as much as one of the biggest regrets that people have on their deathbeds lies in how they wished they hadn’t worked so hard, this realisation clearly contradicts what actually happens in the now. The average American, for instance, spends more than one-third of their day working, and slightly less than one-third sleeping. This of course varies according to where you live, as revealed through a study done by fitness tracker Jawbone UP. And in between that bulk of sleeping and working, we of course fill our lives with various mini activities, including what seems to be our all time favourite activity – consuming digital media content. In fact, the numbers here seem to either prove that we are extremely well-versed at multitasking or that we’re gifted with the ability to skive at work without being caught. So yes, apparently the average American spends 11 hours per day on digital media. Done the math? 11 hours on digital media + 8.8 hours working + 7.7 hours sleeping = 27.5 hours. How does that work out? Though we haven’t figured the real reason behind the 27.5 hours a day spent on these three activities alone, we do know that lifelogging has its benefits at helping each of us move beyond 24 hours a day without compromising the amount of time spent on the people or things we love. Here’s introducing a few lifelogging tools that can help us spend our limited time more productively.

Read more: Where the Five-Day Workweek Came From and Gordon Bell Lifelogging at 80

Know it while you’re asleep 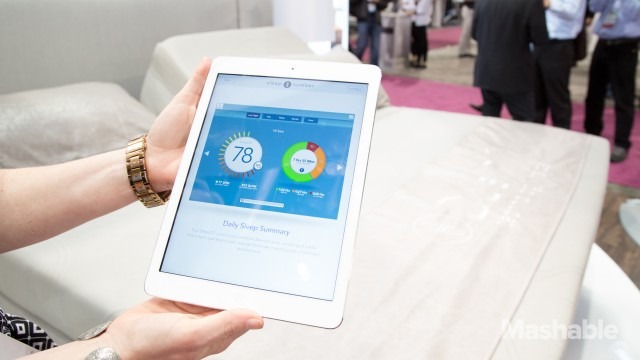 Earlier, we introduced some sleep trackers that could give you a better idea of what you need in order to feel completely rested after a whole night of rest. But what if you could have all that data and implementation in a smart bed instead? And we’re not talking about the kind of smart beds that help you make your bed in the morning (although we do think it’s pretty awesome). This smart bed we’re talking about is manufactured by Sleep Number, and is a voice-activated bed that monitors and aims to improve the quality of your sleep. Tracking your sleep includes analysing various data types like breathing and heart rate, and then scoring them on a scale of 100 to give you an idea of the quality of your sleep. Following that, with the touch of a few buttons, you could adjust the firmness or elevation of the bed, or even get a massage. The downside? This X12 bed comes with a hefty price tag that we wouldn’t even want to reveal here. Find out more here if you can’t wait to get your hands on this. A good night’s rest could just be the answer you need for killing that Z monster that steals some time off the things you need to complete during the day!

Read more: Smart Bed Watches While You Sleep, But It’s Not Creepy

Work out while you’re at work 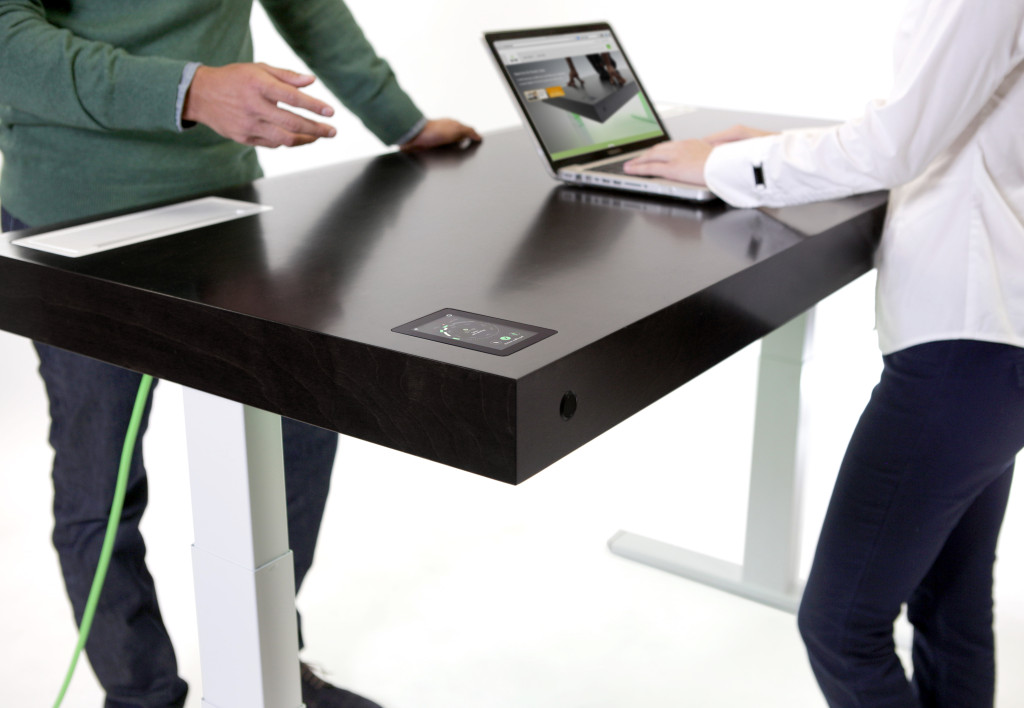 With the best sleep that you can get, you’re probably skipping your way to work already. Besides all the fitness trackers that we’ve been introducing to you, here’s one that we think could very well be the exterminator of that pesky excuse, “I just don’t have time to get in shape!”. Here’s introducing to you the Stir Kinetic desk, a smart desk designed to track how much time you spend sitting down versus standing up and will remind you to switch positions from time to time to keep you active and make you more productive. According to Stir’s founder, four hours of standing per day instead of sitting burns as many extra calories as a two mile run. The Stir Kinetic smart desk is essentially driven by software that you access through a touchscreen (centre of picture above). It learns your patterns, remembers your preferences, and lets you know if you’re not moving enough. It could also be integrated with the FitBIt that you own so that all the calories burnt throughout your day at work are tallied up with the gym session you have at the end of the day. Health is wealth so how about earning that extra wealth at the activity you spend the most time at?

Track it while you’re feeling it 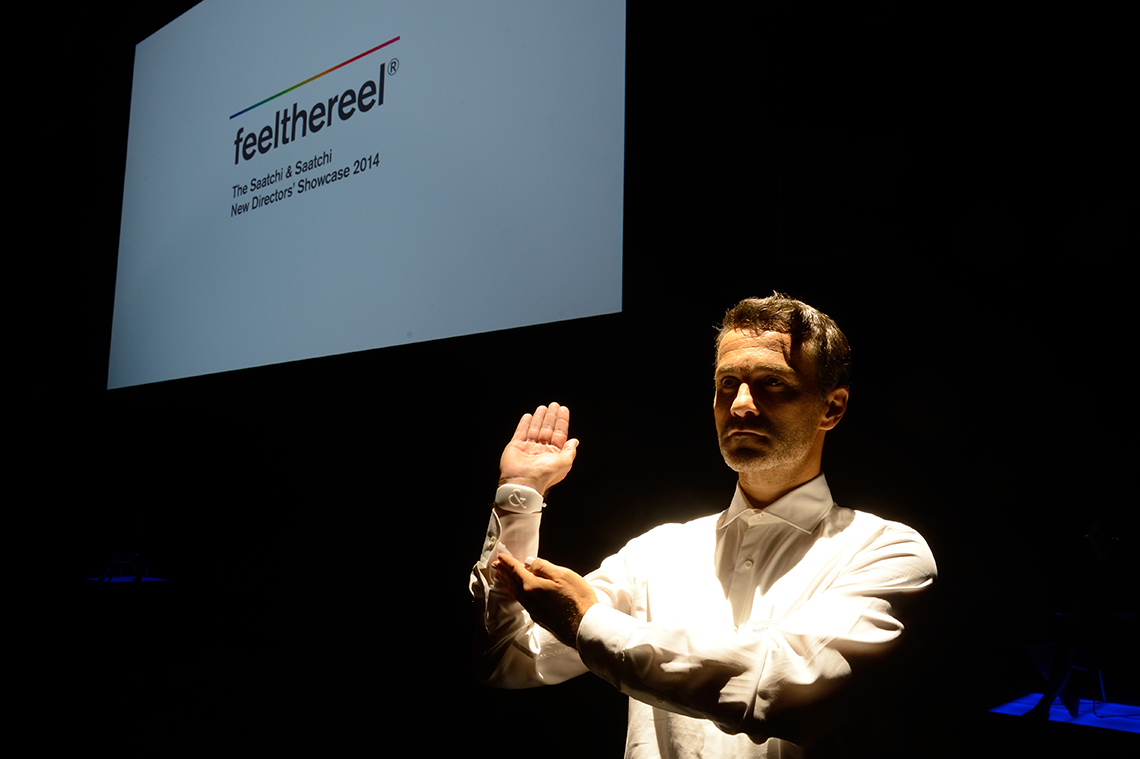 So apart from your physical well-being, one way to help you use your time more productively could be to improve your emotional well-being. After all, happier people are about 12% more productive. My Momentum for Chrome plugin, for instance, always tells me, “Do more of what makes you happy”. But how do I really know what makes me happy? The wristband that you see in the picture above, designed by Studio XO’s XOX platform, is here to help you out a little! The XOX wristband measures biometric data and then gives a visual signal on how the wearer is feeling. Besides being used for the quantified self purpose, XOX could also be used to bridge the gap between artistes and brands towards their audience. A case in point was how the XOX wristband was worn during Saatchi & Saatchi’s New Directors Showcase 2014. Happier audiences and happier people could be the key to reducing the time wasted doing things that we don’t actually enjoy.

SEE ALSO:  This week in lifelogging: a little crazier, a little happier

Read more: The Newest Wearable Tech Keeps Track Of How Happy You Are and Philip Thomas on Building a Personal Dashboard and Alert Shirt: Wearable Tech That You Can Feel

Quantify it while you’re speaking 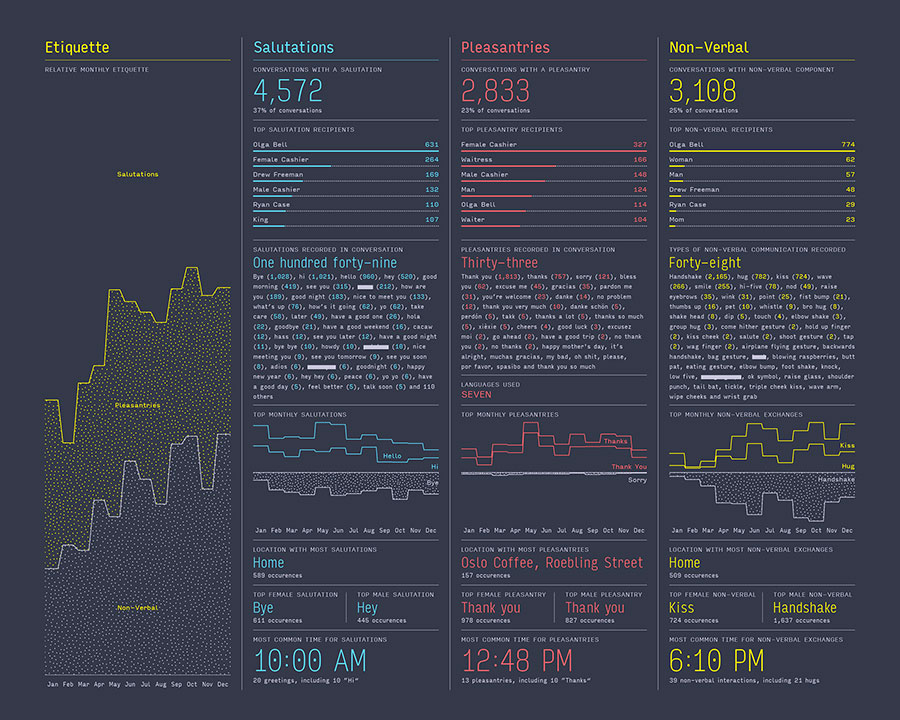 This last suggestion for you to live a more productive and happier life could seem a little extreme, but here’s how one man by the name of Nicholas Felton did it. Always curious about data, charts and daily routines, Nicholas quantified every conversation he had in 2013. According to his website, this project aspires to uncover patterns and insights within the data and metadata of a large and personal data set and its sources include conversations, SMS, telephone calls, email, Facebook messages and physical mail. So yes, all conversations. And since there isn’t an app for it yet, Nicholas took notes manually. And until someone can design a device or app that accurately quantifies all conversations, I’m doubting the fact that many, if any, would be disciplined enough to do what Nicholas Felton did. Still, we wanted to add that in this week’s productive living post because conversations can probably tell a lot about how one is living his/her life and can seek to work around it, if ever, the data becomes available. Until then, have a happy weekend with many meaningful conversations with your loved ones!

Read more: The Beginner’s Guide to Quantified Self (Plus, a List of the Best Personal Data Tools Out There) and What will the Internet look like in 100 years? This infographic takes a guess

SEE ALSO:  This week in lifelogging: can we manage the data we find?