Crayfish parties in Sweden is one of our most valuable and rooted traditions. Beside crayfish we have Västerbotten cheese pie, bread, beer and snaps (like aquavit, vodka or similar). We wear funny hats, decorate with lamps and sing ridiculous songs.Since we want to serve as much cultural experience as possible to all Narrative employees, the Stockholm team arranged a crayfish party at the office.  Sue, from Malaysia, Josh from UK and Dzana with Balkan roots share their experience and expectations. 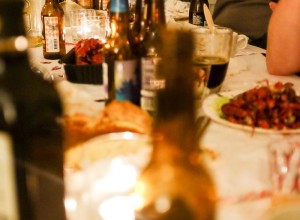 ​Dzana:  We all got our own crayfish ans they arranged all the sides. We had cheese-pie, different sallads, super tasty bread and Swedish snaps. They had decorated the dining area with red crayfishdecorations. They got crayfish plates, napkins and hats. The evening was really nice, we were a good crowd from all parts of the Narrative team, product, design, support, sales, backend, front-end.

Josh: Last week I made Västerbotten pies. Apparently they were glorious, although I sacrificed my household for them as the entire apartment block now smells of cheese. The crayfish party wasn’t half-bad either. 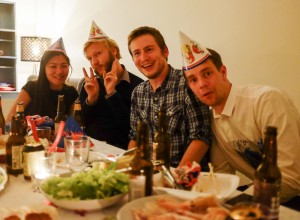 Dzana: ​I would give it a 8! The reason for the 8 is just the fact that I don’t love crayfish that much. It is tasty but not my favorite dish. If I would’ve been a crayfish-lover I would rate it to a 10!

Sue: 7 because I think I would be pretty sick of crayfish (the dishwasher smelled like leftover crayfish the day after) 10 if it is phrased “Crayfish party EVERY YEAR”

Josh: I don’t eat crayfish either because I’m vegetarian. But I did like the pie. I do love pie! And because it was in good company I rate it a dazzling 9.

Sue: Yes! But I had crayfish before in IKEA Singapore, they sold 5 teeny weeny pieces way beyond cost price. But they were cute, so I had to try them!

Josh: It was indeed! 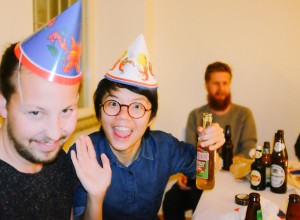 Dzana: ​I am always eager to hang out with my awesome colleagues! If that is during another crayfish​-party then I am eager! 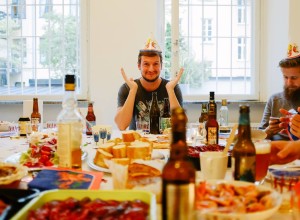 Sue: I think so? I’m still trying to figure out what typical Swedish means

Josh: The only thing that could have made it more Swedish would have been meatballs and IKEA furniture. But it was certainly up there already!

​Dzana: Yes! We had a “singing booklet” were they had picked out almost 20 snaps-song that we sang throughout ​the whole evening.

Sue: I tried to! Ett tua la la la then I got lost. Ironically, I was in charge of preparing the song sheets but I had absolutely no clue. Maja helped with her Swedish expertise!

Josh: I tried to, but my mouth was too stuffed full of pie. Also the Schnapps were too weak for my liking. I prefer alcohol you can use to strip paint from walls.

Dzana: ​No, not really. ​Thats too bad because this was so much fun!

Sue: Chinese New Year? Because everything is red and there’s flying food

Josh: Because it rains so unexpectedly in England, I think the majority of people have given up celebrating anything but beer. Apart from the standard Christmas, Easter and New Years shenanigans, we only have Bonfire Night – a night “celebrating” this guy called Guy Fawkes failing to blow up Parliament. To “celebrate” this morbid joke we stand in the freezing cold, moaning until we can go home and watch TV, and watch fireworks for the umpteenth time (because we feel we should) while pretending to have fun amongst a crowd of pushy people and babies crying. We also have St. George’s Day – celebrating the day some guy supposedly killed a dragon and saved a princess. Although nobody knows what to do on that day, so instead we just moan about there not being any fun celebrations. English parties are fun! Although is drinking at the pub every Friday and Saturday a tradition? 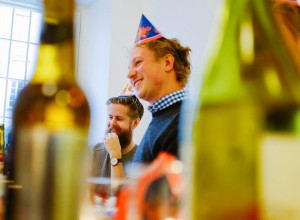 Dzana: We need to have an Easter Dinner where we paint eggs and drink “påskmust”!

Josh: I want to do a Swedish Halloween, where everybody dresses as dead Vikings. And we have pumpkin pie. I love pie.